The US Grout Story

The story behind the development of a permanent, deeply-penetrating, densely-curing cementitious grout for sealing fractures in rock, controlling ground water, and stabilizing weak soils. 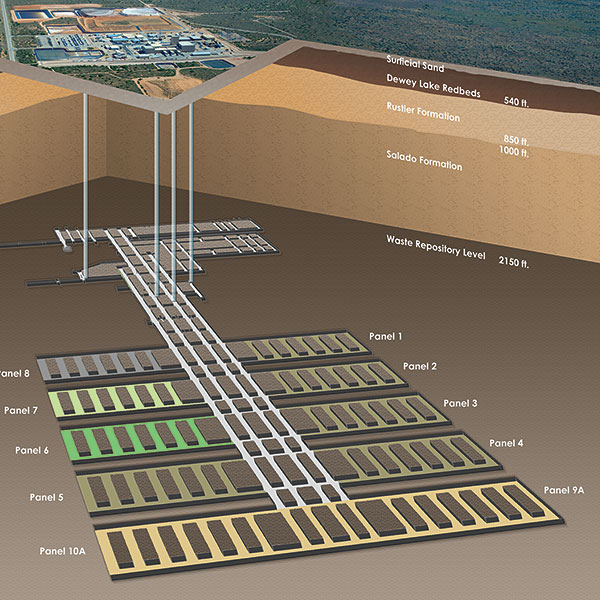 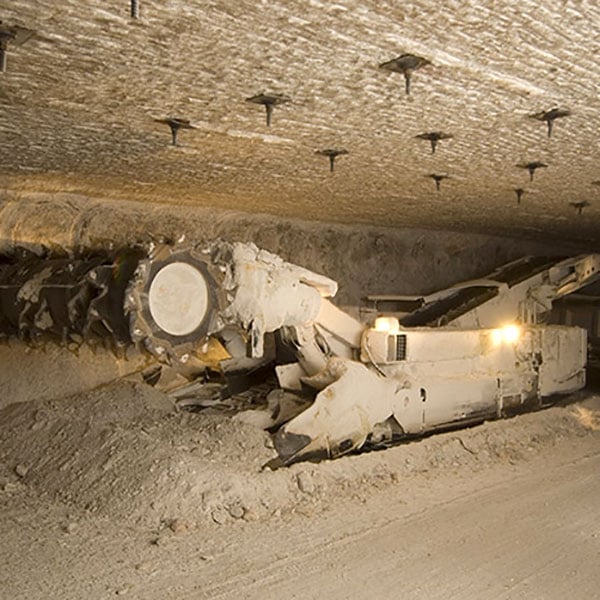 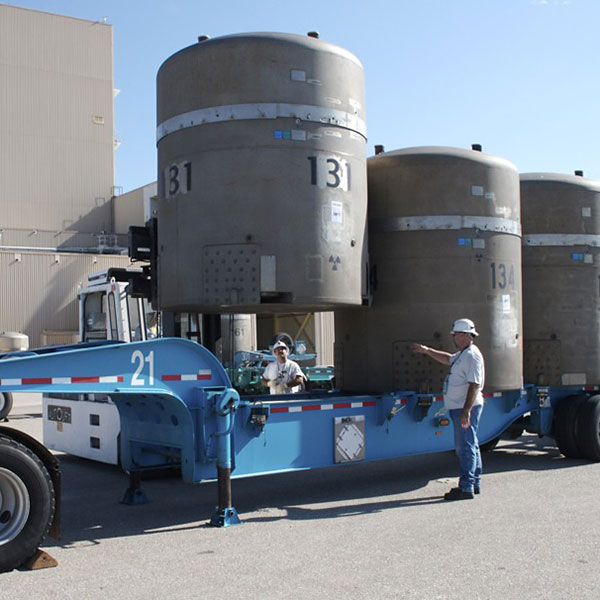 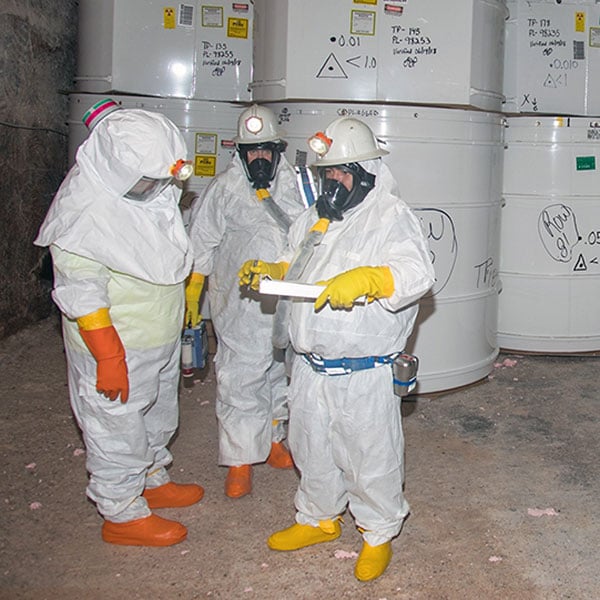 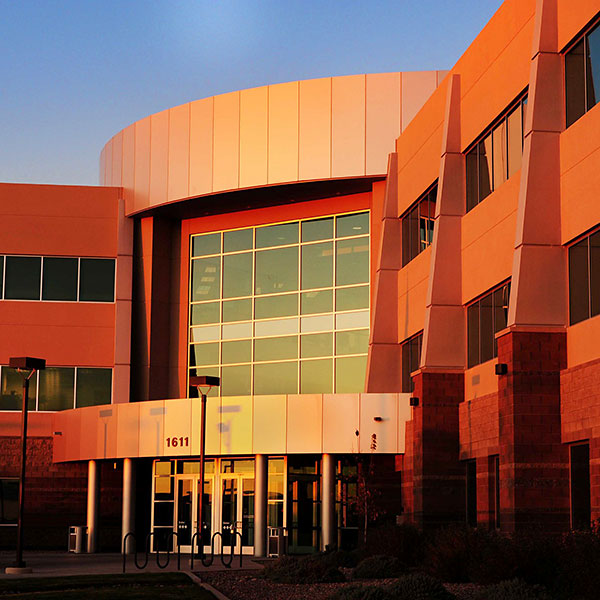 1 • A cross-section diagram of the Waste Isolation Pilot Plant, the nation’s only deep geologic repository for nuclear waste.

2 • A continuous miner, expanding the storage chambers (panels) in the salt formations of the Waste Isolation Pilot Plant.

3 • A shipment of defense-generated transuranic waste arrives at the WIPP repository for emplacement.

5 • Sandia National Laboratories, where US Grout Ultrafine was developed.

THE U.S. DEPARTMENT OF ENERGY (DOE) had a problem.

Under New Mexico’s Chihuahuan Desert, 2,154 feet below ground, located in a salt bed approximately 2,000 feet thick, the DOE had carved out a multi-chambered repository designed as a final resting place for transuranic waste generated by the nation’s nuclear energy activities—they call it the Waste Isolation Pilot Plant (WIPP).

The weight of the overlying rock subjected the underground storage chamber openings to closure force. This force, equal in all directions, is roughly one pound per square inch per foot of depth. Stress redistribution around the openings resulted in the microfracturing of the salt, extending into the enclosing salt as much as a meter and a half. This microfractured rock salt, called the “Disturbed Rock Zone,” would allow brine and radionuclides to bypass any seal placed in the tunnels.

Commercially available microfine grouts were analyzed by Sandia National Laboratories (the scientific advisor for the Waste Isolation Pilot Plant) and found to be unsuitable. Sandia then proceeded to develop a new grout which, after extensive laboratory and in-situ development and testing, was successfully applied underground at the WIPP repository. The permeability of the DRZ was lowered as much as 1,000 times, and the grout was then approved for use at the WIPP.

The keys to the successful development of this unique critical-need grout were these:

• developing the technology to effectively process the grout particles to a consistent ultrafine size,

• achieving critical rheology characteristics in the grout paste by adding pumice to the mix design,

• amplifying the life-span and inherent performance benefits of cementitious grouts with the pozzolanic reaction ignited by the pumice—engineered benefits that include improved resistance to chemical attack as the result of decreasing alkalinity and controlling the amount of readily soluble residual lime (Ca(OH)2), improved resistance to thermal cracking (because of lower heat of hydration), and enhancement of strength and decrease in permeability because of pore refinement.

Utilizing the proprietary technology from that breakthrough beginning, US Grout has since formulated additional ultrafine cementitious grouts to meet a variety of grouting needs—from flexible “squeeze” cements to rehab oil and gas wells to a customizable VX type for use in permeating a variety of soil types.

† Quoted from page 78 of AECL’s Whiteshell Laboratories research findings and analysis on the ultrafine cementitious grout developed by the DOE’s Sandia National Laboratories.

US Grout’s unique and effective cementitious grouts are the sum of two key technologies—the performance-enhancing pozzolanic charge given to cementitious grout by pumice, and processing technologies that refine the components—in the case of our ultrafine grouts—to average size of 3 microns, allowing the grout to fully penetrate micro-fractures and dense soils. That’s genius, times two.

POZZOLANIC SUPER-CHARGE. The performance charge that pumice pozzolan gives to standard concrete is well documented by modern research (done by Sandia National Laboratories, AECL’S Whiteshell Laboratories, the University of Utah, Washington University St. Louis, and others) and backed up with the indisputable proof of those enduring Roman concrete structures.

In a nutshell, studies show that only about 75% of Portland cement powder is converted to Calcium Silicate Hydrate (CSH), the binder that glues concrete together. Most of the remaining 25% is converted to Calcium Hydroxide (CH), a by-product of the hydration reaction between water and cement—a by-product that has a tendency to create a host of problems that have an adverse effect on long-term performance. Adding a high-purity, ultrafine natural pumice pozzolan to the grout formulation mitigates or completely eliminates the CH problem. In fact, the pumice pozzolan turns the CH into additional CSH, densifying the cementitious grout and making it nearly impermeable. And, as Sandia National Laboratories discovered, the pozzolanic effect is greatly enhanced by the increased surface area of the ultrafine pumice particles.

ULTRAFINE PARTICLE TECHNOLOGY. The process to refine the Portland cement, the pozzolanic pumice, and the super plasticizer down to an ultrafine size resulted in a one of the two US Patents issued for the grout. Such an ultrafine particle size is crucial to the ability of the grout to deeply penetrate and effectively seal microfractures and pass through and completely grout silty sandy soils. US Grout Ultrafine grouts contains particles of which approximately 90% are less than 8µ in diameter, with average particle size approximately 3µ in diameter. (Sizes determined by the Micro Meritics company, using their sedigraph.) Standard OPC grouts have an average particle size of 15µ.

The Wrong Grout Can’t Be “Made Right”

It is this fact—that it is particle size and rheology, not viscosity, that determines a grout’s ability to effectively penetrate extremely small openings and fine-grained soils—that drove the development of the patented technologies behind US Grout ultrafine grouts. Sandia scientists understood that they had to get the fluidity—the rheological properties—right if they hoped to control workability, attain full penetration, and have a hardened grout that would perform mechanically for thousands of years. They also understood that the final grout formulation had to work perspicuously with standard equipment and emplacement methods to consistently secure the expected results.

Extensive testing (and in-field failures) have proven that attempting to tweak the viscosity of a standard cementitious grout to amp injectability results in lower compressive strength and water bleed-off during crystallization, which punctures the grout seal with a porous matrix of interconnected wormholes, resulting in poor density. To make things worse, those self-inflicted problems compound the already inherent deleterious effects of standard (non-pozzolanic) cementitious grout mix designs.

Better: a properly formulated grout, designed to flow where other can’t. That’s what you get with US Grout products.

US Grout’s efforts to expand the application boundaries of our cementitious grout in a wider variety of soil types have led to the development of a flexible cementitious grout type—US Grout Ultrafine VX. Utilizing a variable-dose liquid superplasticizer (as an accelerant and dispersant), the effective rheology of Ultrafine VX can be field-adjusted, as determined by the project engineer, to work with the project-present soil type(s).

Our type VX grout was first publicly demonstrated at the 2013 Geotechnical Grouting Conference. Injected into a very fine colloidal silica sand, US Grout Ultrafine VX excelled in the tests. Using a standard 2 to 1 water/grout ratio, our type VX charged up the 60-inch sand-filled column in an unheard-of 80 seconds. The PSI at the pump was only at an eight when our suspended-particle grout hit the top (test allows for up to 10 psi and time allowance is 20 minutes). No other cementitious grout being demonstrated/tested that day came close…not even when adjusted to a more favorable grout/water ratio.

Not only do our cementitious grouts attain impressive soil permeation rates, they can do so even when using a reduced water-to-cement ratio to achieve a compressive strength of over 8000 psi.

Video: The US Grout Story

As the world-wide distributor for US Grout products, Avanti International (www.avantigrout.com • 1-800-877-2570) provides the customer service, objective professional advice, material estimates, and the caliber of world-class technical support that comes only from over 35 years of geotechnical experience.

1 • A cross-section diagram of the Waste Isolation Pilot Plant, the nation’s only deep geologic repository for nuclear waste.

2 • A continuous miner, expanding the storage chambers (panels) in the salt formations of the Waste Isolation Pilot Plant.

3 • A shipment of defense-generated transuranic waste arrives at the WIPP repository for emplacement.

5 • Sandia National Laboratories, where US Grout Ultrafine was developed.

© Copyright US Grout Incorporated. See the LEGAL PROVISIONS regarding this site.